The initial setup of a working environment for building any software projects is always a big pain especially for beginners. In this article I will discuss about the initial setup you should have to work on Django based projects.

The command line tool is extensively used by the developers. By using it you can easily install and configure your projects. However, you don't have to install it. It's already available in your computer.

If you are a Mac user you can use Terminal (a command line tool) which is located at /Applications/Utilities/Terminal.

Django is a Python based web framework. So, you need to install it first. For detail instructions of installing Python check the following articles based on your operating system:

As a developer you should have separate virtual environments for every Python based project so that project-wise dependencies can be managed separately. Pipenv is a Python's officially recommended tool for managing Python packages and virtual environments.

For detail instructions of installing Pipenv check the following article which also contains some basic usage of Pipenv.

Now your system are ready to install Django. Let's create a new directory (named hello-django-project) first where the new django project will be created. Type the following commands to create the new directory and enter into that directory.

With this command, a fresh Django has been installed with a separated virtual environment for your project. To check look at the directory you can see two files are already created there (Pipfile and Pipfile.lock) to manage the project dependencies.

If you want, you can check the Django version by running the following command. You should see the django version (in this example it is 2.2).

At this point you should see the following directory structure.

Now, in your browser type http://localhost:8000/ and you should see a congratulations page as shown below. 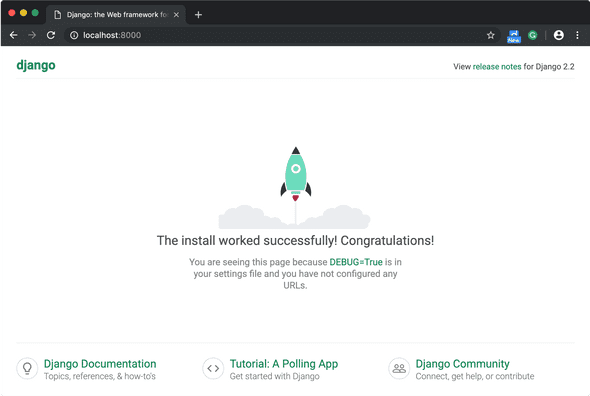 Cool! You have successfully installed a new Django project.

To exit from local web server press Ctrl + C together.

To install Git on Mac run the following command via Homebrew.

After installation, you need to configure Git with your name and email address. It is a one-time setup. Whenever you make a commit these credentials will be associated with that.

This configuration can be changed anytime by typing the same commands with new name and email address.

You are welcome to write comments, suggestions, corrections, or any queries related to the article. Your comments may take some time to be appeared. Please be aware that any irrelevant comments will be deleted. Thanks for your understanding, and your respectful & relevant comments!